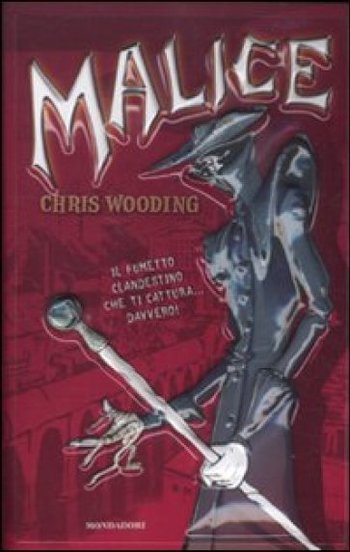 In a World... much like our own, there exists a comic. Only kids know it exists, and even amongst them it is mostly rumors. It is a comic called Malice, a macabre, twisted thing, showing teenagers in various desperate situations in a nightmare world populated by monsters. The rumor goes that if you perform a certain ritual, Tall Jake, the narrator of the comic, will come and take you away from this world.

Most don't believe it. But there are still those who perform the ritual. And one day a boy named Luke calls Tall Jake, and disappears a few days later. Two of his friends, Seth and Kady, investigate his disappearance. Until they happen across a new copy of Malice and see Luke inside of it...

Eventually they discover that Malice isn't so much a comic as a documentary, showing events that happen in another world. Tall Jake is real, and he uses the comic to trick kids into performing the ritual that allows him to kidnap them and force them into the city in his world. Seth and Kady eventually decide to cross over into Malice, and plan to fight Tall Jake and put an end to his nightmare.

Malice and its sequel, Havoc, are an odd combination of literature and graphic novel, composed primarily of text but including narrative in comic form when the in-universe comic focuses on the main characters. It is written by British author Chris Wooding, who continues his trademark style of fashioning Death Worlds where Anyone Can Die.