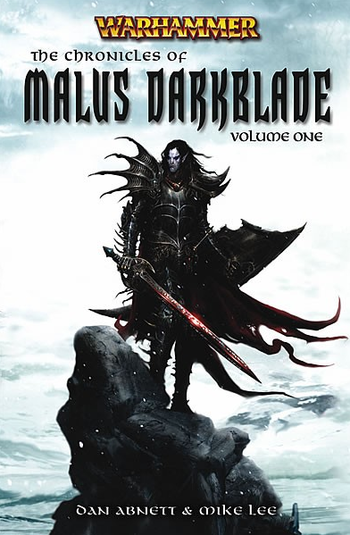 A series of Warhammer books written by Dan Abnett and Mike Lee and following the character of the same name. It was initially a comic strip released by Black Library which follows the same general plot but differs in a few areas. The books are mostly set in the distant land of Naggaroth, where the dark elves rule city-states under the fearsome Witch-King.
Advertisement:

The plot of the series seems at first to be a standard fantasy cliche: the protagonist must collect five Plot Coupons to save his own soul from a powerful demon that uses the name T'zarkan. The monster is inhabiting his body, but has made a deal with Malus: Collect the five relics needed to loose T'zarkan on the world, and Malus will be free.

It's clear early on, however, that their relationship isn't that simple, and Malus is no standard fantasy hero. For one, he's not actually a hero at all, but a ruthless Villain Protagonist: Throughout the series, nearly everyone Darkblade meets will eventually be betrayed by him. Though, admittedly, among the dark elves known as druchii, often it's a race to see who betrays whom first. Even his own family. Especially his own family.

Malus Darkblade is not the strongest, smartest, or most skilled of his race, or even of his siblings — but what he is is the most hateful SOB this side of the Chaos Wastes, and he almost never gives up, even when there's no plausible path to success.

"The Shadow & The Blade" DLC added Malus to Total War: Warhammer II as a legendary lord.