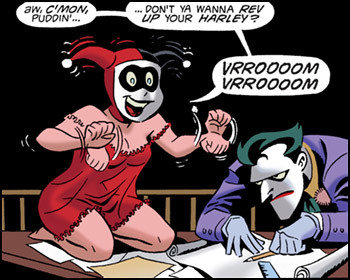 He'd much rather be thinking about Batman.
"Unbelievable. I usually fall for the whipped cream bikini every time."
— Jon Moxon, Varsity Blues
Advertisement:

Ms. Fanservice approaches her target. Wearing her tightest blouse, she sidles up to him, runs her hand down his arm, puts on a soulful look, smiles at him sweetly, does the "push-up" thing to accentuate her cleavage...

And her efforts to seduce the guy fall completely flat.

Why? Usually because the intended "victim" is completely and totally above such things. Or maybe he just knows better than to play her game. Maybe he has absolutely no idea what she's doing. Or he's pre-occupied. Or he's just not attracted to her in particular, women in general, or anybody at all. Or, more simply, he is taken and is faithful.

May result in a request to Please Put Some Clothes On, depending on the nudity level of Ms. Fanservice at the time. Compare to Not Distracted by the Sexy, where people aren't intentionally ignoring the fanservice so much as they don't seem to notice it in the first place. If the object of seduction is an enemy, the seductress may ask Aren't You Going to Ravish Me?. Can play a part in a character's decision to Defect From Decadence. Often used in tandem with Ready for Lovemaking, to better subvert it.