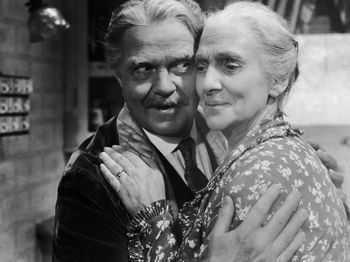 Get your tissues ready.
Honour thy father and thy mother.
— Exodus 20:12
Advertisement:

Make Way for Tomorrow is a 1937 dramatic film directed by Leo McCarey.

Barkley and Lucy Cooper (Victor Moore and Beulah Bondi), an elderly married couple, have just lost their house of many years to foreclosure. Instead of graciously offering to take care of their elderly parents, their adult children — George (Thomas Mitchell), Cora (Elisabeth Ridson), Nellie (Minna Gombell), and Robert (Ray Mayer) — are horrified at the idea of having them both in their homes. As a result, they decide to separate their parents, promising day after day that they will reunite them.

George and his wife Anita (Fay Bainter) take the "burden" of his mother, and Cora and her husband Bill take her father. Knowing they are considered outsiders — even useless — in the fast-paced lives of their children, the Cooper parents try to make the best of their situation, but to no happy avail. Then, they spend a lovely afternoon in New York City, remembering those early days in their marriage, when the world was so promising and new.

In its day, this film was panned by audiences for McCarey's uncompromising ending (which he fought the studio to keep intact). Now, it's lauded for its subtle, beautiful story, observing the aging and the people they leave behind. Japanese director Yasujiro Ozu was a big fan of the film, to the point that his 1953 film Tokyo Story is often described as a Foreign Remake of Make Way for Tomorrow.

This work consists of the following tropes: