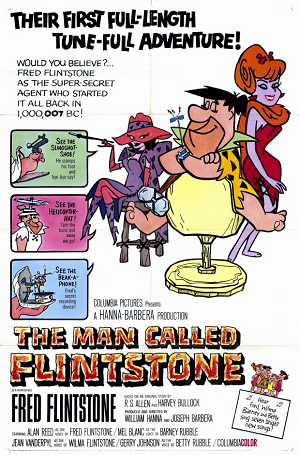 The Man Called Flintstone is a 1966 American animated musical comedy film produced by Hanna-Barbera and released by Columbia Pictures. It was the second Hanna-Barbera feature, after Hey There, It's Yogi Bear! (1964). The film is a theatrical spin-off of the 1960-66 television series, The Flintstones, and is a Swan Song of the TV show, made immediately following the end of production on the series. The working title of the film was That Man Flintstone, with the film poster featuring Fred in the same pose of the Bob Peak poster for Our Man Flint. The film is a parody of the James Bond films. This is the only animated Flintstones film to get a theatrical release and the only feature-length film (there have been several made-for-TV movies) to feature the original 1960-66 series voice cast (almost; Betty is still voiced by Gerry Johnson in this film).note This is also the first time Henry Corden appears as Fred, although it's just for Fred's singing voice in "Teammates". He would go on to succeed Alan Reed as the official voice of Fred beginning in the late 1970s.

When Agent Rock Slag is injured in the line of duty, his superiors contact Fred Flintstone due to his resemblance to Slag and assign him to complete his mission: to meet Tanya, the Green Goose's #1 lieutenant, who has agreed to turn over the evil Green Goose in return for a chance to meet the irresistible Rock Slag.

This animated film provides examples of the following tropes: