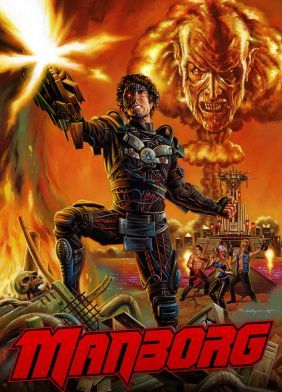 Manborg is a 2011 film from Astron6. It follows the story of an unnamed soldier of the Hell Wars, fought and eventually lost by humanity against the infernal forces of Count Draculon. Shot dead after vowing bloody revenge, he is dragged off the battlefield by an unseen party and resurrected with Hell's best robo-technology, turning him into Manborg, humanity's only hope against the demons. With his human allies: Justice, Mina, and #1 Man (who is voiced by KYLE HEBERT), he must confront Count Draculon and end his reign of terror.

Also, the film was made on a budget of 1000 Canadian dollars.

Unlike certain other examples such as The Final Sacrifice, Manborg is well-aware of its limitations and relies on being intentionally terrible in just the right ways. In addition to its intentional failures, it's also full of non-meta humor, to the point that its status as an Affectionate Parody of low-budget sci-fi action movies is obvious.

It can be viewed on demand on Youtube, and the official trailer is here.