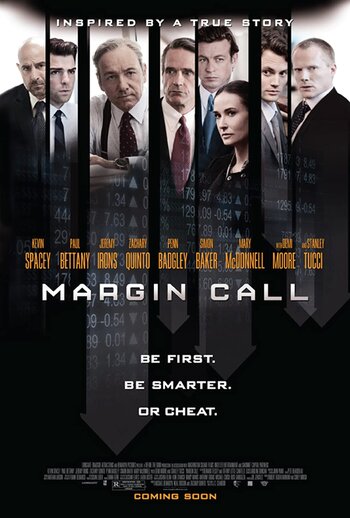 "There are three ways to make a living in this business; be first, be smarter, or cheat. Now, I don't cheat. And, although I like to think we have some pretty smart people in this building, it sure is a hell of a lot easier to just be first."
— John Tuld
Advertisement:

A 2011 drama film set at a Wall Street investment bank during the financial crisis of 2007–10, written and directed by J.C. Chandor and featuring an All-Star Cast.

Sam Rogers (Kevin Spacey) is one of the senior executives at an unnamed investment firm in New York City. After the firm fires a number of employees on their trading floor, their former head of the Risk Management department, Eric Dale (Stanley Tucci), attempts to warn his bosses regarding a project he is working on, but to no avail. As he is leaving the building, Dale gives his project to analyst Peter Sullivan (Zachary Quinto) and warns him to "be careful". Sullivan subsequently analyzes Dale's project and discovers that the firm's holdings are excessively leveraged, and will doom the firm if their market value goes down.

During a high-stakes meeting with senior company executives, including the firm's CEO John Tuld (Jeremy Irons) and head of trading Will Emerson (Paul Bettany), Rogers and Sullivan reveal the impact of Dale's findings, and they subsequently realize that they will need to sell off the now-toxic company assets in order to save the firm.

Got a Spiritual Successor in the HBO movie Too Big to Fail which depicted the actual consequences of what Lehman Brothers did.