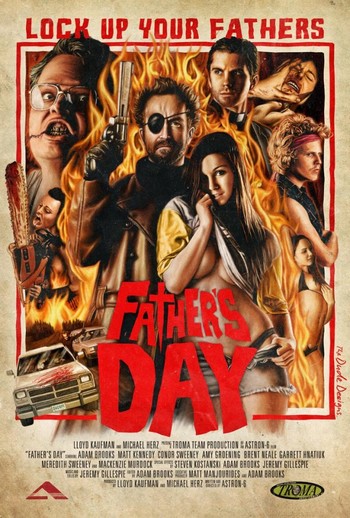 A 2011 film from Troma Studios, written and directed by Astron6.

When his father is raped and murdered, leaving himself and his younger sister Chelsea as orphans, Crazed vigilante Ahab becomes obsessed with bringing justice to the one responsible, Chris Fuchman, also known as the father's day killer. After accidentally killing an innocent man, Ahab is sentenced to ten years in prison. When his time is served, he retreats to the seclusion of the forest.

Fuchman targets the father of Twink, a teen hustler. Discovering the killings have resumed, Ahab's old mentor, the ailing Father O'Flynn, sends John Sullivan, a young priest, to retrieve Ahab, who resumes his quest for vengeance. After Chelsea is kidnapped, Twink, Ahab and Sullivan set off to rescue her and take down the Fuchman once and for all. However, the group quickly discovers that the killer is more dangerous than he seems...

Not to be confused with the 1997 comedy film starring Robin Williams and Billy Crystal.