Film / The Man Who Invented Christmas 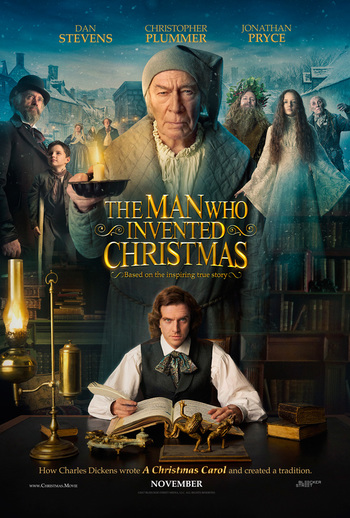 Dickens: Mr. Scrooge, you and I are going to do wonderful things together.
Scrooge: I severely doubt that.
Advertisement:

The Man Who Invented Christmas is a 2017 biopic based of the book of the same name by Les Sandiford detailing the creation of A Christmas Carol, starring Dan Stevens as Charles Dickens, Jonathan Pryce as John Dickens, and Christopher Plummer as Scrooge.

In 1843, Dickens is still England's most popular novelist, but his last three books haven't been big hits. Needing money and something to restore his reputation, he sets down in six weeks to write what will become A Christmas Carol. Unfortunately his father John Dickens comes to town for a visit, bringing Charles into conflict with him and his own troubled past.