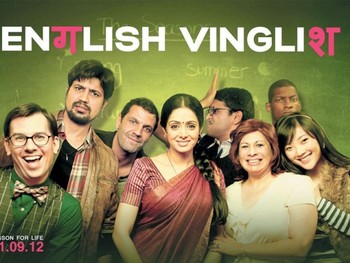 English Vinglish is a 2012 Bollywood film starring Sridevi, Mehdi Nebbou, Adil Hussain, and Priya Anand. The film is written and directed by Gauri Shinde. It was Sridevi's first film after a 15-year hiatus from acting.

The story is about an Indian housewife Shashi, who has a small home-run catering business for Indian sweets and snacks, but is condescended to by her husband Satish and daughter Sapna. For a logical sequence of events she needs to spend 5 weeks in New York with her sister's family, helping with a niece's upcoming wedding. While there, she learns English in secret and gains everyone's respect.

Tropes appearing in English Vinglish include: