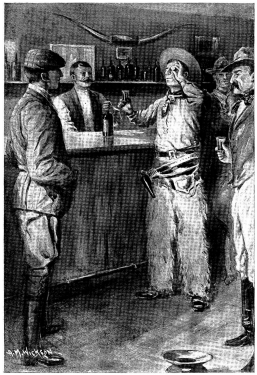 So send me far from Lombard Street, and write me down a failure;
Put a little in my purse and leave me free.
Say: "He turned from Fortune's offering
to follow up a pale lure,
He is one of us no longer — let him be."
— "The Rhyme of the Remittance Man", Robert W. Service
Advertisement:

"That fop with the English Accent." An upper-crust younger son of an English lord with no prospect of inheriting, sent off to the Americas (or Australia, or South Africa, or anywhere on the map that happens to be painted pink

during the time period) to get him out of the way. Usually given a small allowance (the "remittance"), that isn't quite sufficient to support him in the way he is accustomed but is enough to support him — if he'll just pare back his standards a bit. He also has an ingrained aversion to "working in trade", and he's not used to manual labor.

In Westerns, he's often connected somehow to the Cattle Baron; he may be the money-man or at least represent "the money", or be the "manager". Could also be a drunken wastrel with no visible means of support. In Canadian Westerns, he might be the local Mountie or the local criminal.

In Genteel Interbellum Setting mysteries, he's usually back from Australia or South Africa (occasionally South America, the US or Canada) and most of the family would prefer that he'd stayed gone. The concept of the remittance man became pretty much obsolete with British entry into World War I, which gave all of the sons of the aristocracy something to do, so this trope probably will not appear in a work set after 1914. (The idea of the "remittance man" was made legally obsolete with the Administration of Estates Act of 1925, which did away with primogeniture.)

Usually only appears in fairly realistic Westerns, except in Canadian versions where he's a stock character. Permits the inclusion of a different version of the City Slicker type, more "civilized", more condescending, and generally just as incompetent.

Sometimes in other settings (like the South Pacific) where any European is likely an outcast, with many of the same tropes still applying.

If he's smart, he'll almost certainly overlap with the Gentleman Snarker. Is quite likely to be the Black Sheep of his family.