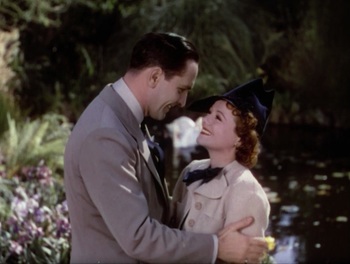 "Hello, everybody. This is Mrs. Norman Maine."
Advertisement:

A Star Is Born is a 1937 film directed by William A. Wellman, with a screenplay co-written by Dorothy Parker.

Esther Blodgett (Janet Gaynor) is a starry-eyed farm girl with dreams of hitting it big in the movies. She heads out to Hollywood but struggles to find work as an extra. A friend of hers gets her a job waitressing at a movie star cocktail party. She fails to impress the bigwig producers at the party but does draw the attention of Norman Maine, a major movie star (Fredric March).

Norman has some major problems. Most importantly, he's a raging alcoholic with an unfortunate tendency to get drunk in public. His alcoholism is negatively impacting his film career, which is on the downhill slide—which is making him drink more, in a negative feedback loop. Despite his demons, Norman is enchanted with the lovely, guileless Esther. He gets her a screen test at his studio, which leads to the stage name "Vicki Lester", which leads to a starring role opposite Norman in his next movie. Soon Esther/Vicki is a major star. She and Norman fall in love and get married—but she can't stop his slide into oblivion.

This is not related to the 1948 film A Song Is Born. However, it is the first iteration of a popular show business story that was remade in 1954, 1976, and 2018. Ironically, stars Gaynor and March were the opposites of their characters; Gaynor made only one more movie before retiring from show business, while March was then at the zenith of a film career that lasted into the 1970s.

The Oscar seen in the film is Janet Gaynor's Oscar, the first ever given for Best Actress.