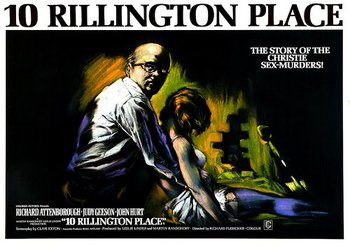 Following a prologue set in 1944, the film skips ahead to 1949 and the arrival of Timothy Evans (Hurt), his wife Beryl (Judy Geeson), and their infant daughter Geraldine to the seedy London flat which Christie sublets at the titular address. Evans is a brutish, illiterate factory worker who beats his wife, and the family has severe money problems. When Beryl discovers that she's pregnant again, this less-than-promising situation leads her to look for a way to get an abortion—which is illegal in 1949 England. In desparation she turns to Christie, who claims to have had medical training and tells her he knows how to perform abortions. Tragic consequences ensue for the entire Evans family.