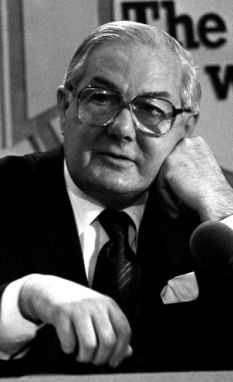 Reporter: What is your general approach, in view of the mounting chaos in the country at the moment?
Callaghan: Well, that's a judgment that you are making. I promise you that if you look at it from outside, and perhaps you're taking rather a parochial view at the moment, I don't think that other people in the world would share the view that there is mounting chaos.
— 1979 interview, amid the 'Winter of Discontent'.
Advertisement:
Crisis? What Crisis?
— How The Sun ran it, helping to bring down Callaghan's government.

Leonard James "Jim" Callaghan, Baron Callaghan of Cardiff KG PC (27 March 1912 – 26 March 2005) was a British Labour Party politician who served as the Prime Minister of the United Kingdom from 1976 to 1979. He is the only parliamentarian in Britain's history to have served in all four of the Great Offices of Statenote (Prime Minister, Chancellor of the Exchequer, Home Secretary and Foreign Secretary), and also ended his time in the House of Commons as Father of the House, its longest-serving member. He had many nicknames including Sunny Jim, Gentleman Jim and Big Jim.

In his youth, Jim Callaghan had served in the Royal Navy, fighting in the Pacific Front of World War II. While injured and laid up in a hospital ship, he wrote a guide to the naval strengths of the Allies and Japanese. He began his political career as a government backbencher, first elected in Labour's 1945 landslide, and made friends quickly enough that he was elected to the Shadow Cabinet each year the party spent in opposition from 1952 to 1963. His first ministerial post, after Labour won power under Harold Wilson in 1964, was as Chancellor of the Exchequer, during a turbulent period in the British economy in which he had to wrestle with a balance of payments deficit and speculative attacks on the pound sterling. In 1967 the government was forced to devalue the pound, despite him saying that it would not. As such, he offered to resign, but was instead made to swap jobs with Home Secretary Roy Jenkins.

As Home Secretary, in 1969, he sent the Army to support the police in Northern Ireland, after a request from the government of Northern Ireland. (Called "Operation Banner", it lasted until 2007 — the longest continuous military deployment in British history.) The same year, he led a cabinet revolt against a proposed reform of trade union law, forcing the government to scrap it. Had this reform been enacted, the strikes that took down his own government would have been illegal.

Wilson's Labour Party lost the 1970 election to Ted Heath's Conservatives, to the surprise of almost everyone but the Conservative Party's pollsters. Yet they returned to government in March 1974, and Callaghan became Foreign Secretary. In this capacity he renegotiated the terms of the United Kingdom's membership of the European Economic Community (the "Common Market") and supported a "Yes" vote in the 1975 referendum for the UK to remain in the EEC.

Then, after Wilson resigned in 1976 due to ill-health, Jim Callaghan became the new leader of the Labour Party and thus Prime Minister.

Labour was already governing with minority standing and it lost seats, one by-election at a time, forcing Callaghan to deal with the Liberals and even smaller parties to hold the House of Commons' confidence. Yet by autumn 1978, opinion polls were showing Labour in the lead. In what is now considered a bad idea, he refused to call an election that could have given his party a majority, and announced this by singing an old music hall song

to ridicule the opposition.

Labour's policy since Wilson returned to office in 1974 had been to deal with economic difficulties by limiting pay rises in the public sector, which seemed to work: inflation had been falling and economic growth had resumed in 1978, accounting for Labour's popularity, and Callaghan gambled that by delaying the election, another year of the policy would be enough for Labour to gain a majority. But Callaghan's gamble backfired on him spectacularly: the unions rejected the extension of the income policy and went on strike, causing the infamous 1978–79 "Winter of Discontent."

When a referendum on Scottish devolution failed a motion of no confidence was passed (by one vote), an election was called, the Conservatives recaptured government, and Margaret Thatcher started her 11-year reign.

Callaghan stayed on as an MP for two further parliamentary terms until he stood down in 1987, then was elevated to the House of Lords. He had been in the House of Commons for 42 straight years. His constituency had been called Cardiff South East for all but his first (when it was Cardiff South) and last terms (Cardiff South and Penarth).

He ultimately became Prime Minister largely not because he was liked but because he was the least hated MP in the Labour Party thanks to the conflict between its left and right wings at the time. However, the way he fought his way back up after his career seemed to be in ruins after the pound devaluation to achieve the premiership a decade later is certainly worthy of respect. He also had one of the closest friendly relationships with an American President (Jimmy Carter) of any Prime Minister, much more so than the often-cited relationship between their respective successors, Margaret Thatcher and Ronald Reagan.

By the end of his life Callaghan had become a respected elder statesman of British politics. In 1997 he was a guest in The BBC's studios to comment upon the general election when the Labour Party finally returned to power under Tony Blair, after 18 years in opposition since his own defeat. He died in 2005, the day before his 93rd birthday, six weeks after overtaking Harold Macmillan's record to become the UK's longest-lived Prime Minister ever.