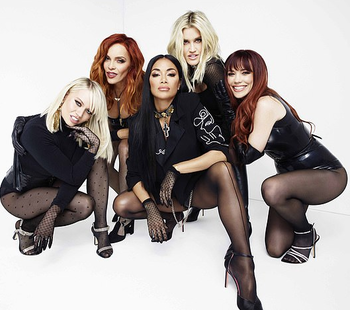 "Pedicure, manicure, kitty cat claws
The way she climbs up and down them poles
Lookin' like one of them puddy cat dolls
Tryin' to hold my woody back through my drawers"
— Eminem, "Smack That"
Advertisement:

The Pussycat Dolls are a pop / R&B Girl Group who originally began as a burlesque dance troupe back in The '90s. At the Turn of the Millennium, the troupe began foraying into glamour magazines and making a name for themselves in the eyes of the public. After shuffling their members and recruiting Nicole Scherzinger (formerly of the Popstars-created group "Eden's Crush"), pop music was next on the agenda, and after launching themselves with the mega-successful single "Don't Cha" their debut album PCD was released in 2005. Another album, Doll Domination, followed in 2008 in spite of the group losing Fiery Redhead Carmit Bachar.

With the release of their music came much controversy, as terrified parents and Media Watchdogs caused a scene over their explicit outfits, dance moves and song lyrics. What really set them off, though, was the fact that in some instances the Dolls were marketed to girls as young as six. The group were even about to release a line of dolls targeting that age group when various parental organisations caused an outcry, causing them to be shelved. Though other popstars such as Britney Spears and Christina Aguilera had donned Hotter and Sexier images which pushed the boundaries of taste before, Pussycat Dolls were pretty much the Trope Codifier in making overtly sexual pop with an image to match.

The group also became involved with some internal politics which spawned numerous, ahem, catfights. After Carmit left the group, there was a television series devoted to finding the next "Doll", however the winner opted to embark on a solo career just weeks after her victory. There was also much squabbling over Nicole Scherzinger being the Face of the Band, and in response to this, each Doll got her own solo track on the deluxe edition of Doll Domination.

It was all too much though, and by early 2010, the group imploded.

that the Dolls would be reuniting.