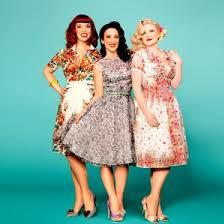 A British close-harmony vocal trio who are unapologetic fans of The Andrews Sisters, and who do a lot of cover versions and some original material. (They're not biological sisters; their joint Stage Name is clearly a tribute to their inspiration.) However, a proportion of the songs they cover In the Style of... '40s/'50s artists, with lots of harmonization and plunky bass fiddles, are much more recent, to interesting effect. Notably, they've covered The Smiths' "Panic", Kate Bush's "Wuthering Heights", The Bangles "Walk Like an Egyptian", Blondie's "Heart of Glass", and Beyoncé's "Crazy in Love".
Advertisement:

They were founded in 2004 by Italian-born Marcella Puppini (her real name), who recruited Kate Mullins and Rosanna Schura. Schura was later replaced by Stephanie O'Brien, and O'Brien was subsequently replaced briefly by Terrianne Passingham and then by Emma Smith. Their regular backing band consists of Blake Wilner (guitar), Henrik Jensen (double bass) and Peter Ibbetson (drums). Their albums to date are Betcha Bottom Dollar (2006), The Rise and Fall of Ruby Woo (2007), Christmas with The Puppini Sisters (2010), Hollywood (2011), The Best of The Puppini Sisters (2015), The High Life (2016), and Dance, Dance, Dance (2020). Besides providing guest vocals in two of Michael Bublé's albums, they also made covers of Kay Starr's "Side By Side" and "Playmates" by The Fontane Sisters for the Kit Kittredge: An American Girl soundtrack in 2008.

Starting with The High Life, the group decided to go completely independent as they felt that the constant Executive Meddling with their old record label got in the way of their creativity.