Music / Emily Pukis and the Vagrants 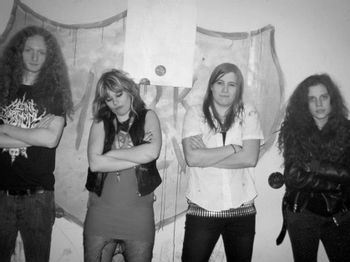 Influences:
"Lead by the fearless leader EMILY PUKIS, the Vagrants assembled to dominate the Philadelphia punk music scene in 2010. And we succeeded. Using the blood of sluts."
—The band's social media page bio

Emily Pukis and the Vagrants were an indie Punk Rock-Heavy Metal band local to Philadelphia formed in October of 2010. Front runner of the band was popular underground animator Emily Youcis and her "pet" vagrants: Leanne Martz, Zack Smith, & Gina Gleason. The band was created primarily to serve as a GG Allin cover band, but began to form more of their own songs soon after.

As of 2016, the band has broken up due to Emily abandoning her previous aspirations and embracing White Supremacy in both her public image and works.

On a more positive note, Gina has been doing some work for Cirque du Soleil, while two daughter bands (called Seed of Serpent and Fever Red) were also formed.