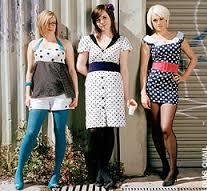 We are The Pipettes, and we've got no regrets...
— "We Are The Pipettes"
The Pipettes were a London-based indie Pop Revival Girl Group who had a rather chaotic history in which they produced one well-regarded album and a follow-up which ... wasn't so well received.

The band's most successful lineup of Rebecca "RiotBecki" Stephens, Rose Elinor Dougall, and Gwenno Saunders was the second. Saunders replaced Julia Laird-Clowes, who left to become the singer and keyboardist for the indie band The Indelicates. After the release of their 2006 debut We Are the Pipettes, Stephens and Dougall left the band, with Dougall going onto a critically acclaimed solo career. Saunders and Monster Bobby (the group's co-creator and leader of their backing band) continued the group, recruiting replacements who also departed soon afterwards. The group's second album, 2011's Earth vs. the Pipettes, featured only Saunders and her sister Ani in the lineup, and tanked in both sales and critical reception. The band dissolved in 2011. Saunders, like Dougall before her, has since embarked on an acclaimed solo career, recording idiosyncratic electropop music in the Welsh and Cornish languages.