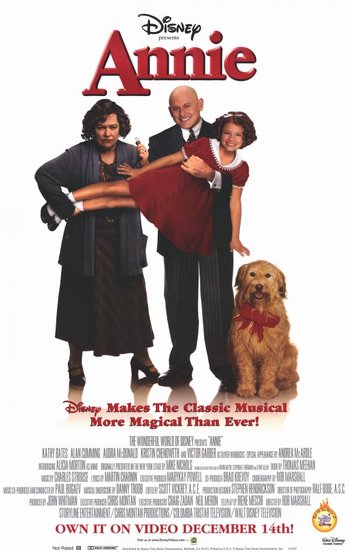 It's a hard-knock life all over again for Annie.
In 1999, Disney and Columbia-Tristar Television co-produced a Made-for-TV Movie version of Annie that aired on ABC. It made its own share of changes to the stage show, though it was considerably more faithful than the 1982 rendition; reinstating the songs "NYC" and "Something Was Missing" from the stage version, adding no new songs, and revealing the names of Annie's real parents. It starred newcomer Alicia Morton as the title character, with Kathy Bates as Miss Hannigan, Victor Garber as Oliver Warbucks, Audra McDonald as Grace, Alan Cumming as Rooster, and Kristin Chenoweth as Lily.