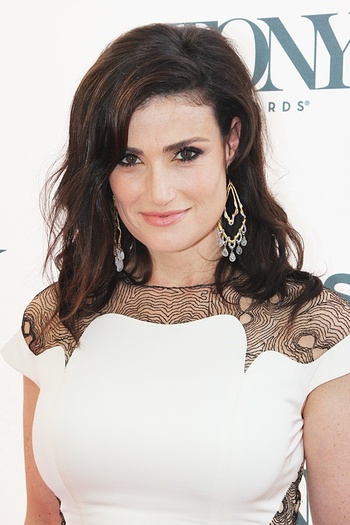 "You can't be the vulnerable, transparent, raw person required to be an artist, and then cover that stuff up and meet the world with some kind of armor on. It just doesn't go."
Advertisement:

Idina Kim Menzel (born Idina Kim Mentzel, May 30, 1971) is a Broadway icon born in New York City, New York. Her breakout role came in the form of Maureen in RENT, which earned her a Tony nomination for Best Performance by a Featured Actress in a Musical. She went on to reprise her role in the 2005 movie adaptation. Later, she won a Tony for playing the main character of Wicked, Elphaba, opposite Kristin Chenoweth's Glinda. She was nominated for a Tony for a third time for playing the main character of If/Then.

After Wicked, she began her screen acting career; she played Nancy in Enchanted and played Shelby Corcoran, who went on to be a recurring character, on Glee. However, her best-known screen role is Queen Elsa of Arendelle in Disney's Frozen franchise.

She was formerly married to her RENT costar Taye Diggs, with whom she has a son; they divorced in December 2014. She has been married since 2017 to Aaron Lohr, whom she costarred with in the 2005 film adaptation of RENT as well as an Off-Broadway production of See What I Wanna See.

Excerpt from "For Good"

Menzel sings first, then Chenoweth. The two then sing in counterpoint (Like a comet pulled from orbit/Like a ship blown from its mooring) before harmonizing in the end.

Excerpt from "For Good"

Menzel sings first, then Chenoweth. The two then sing in counterpoint (Like a comet pulled from orbit/Like a ship blown from its mooring) before harmonizing in the end.