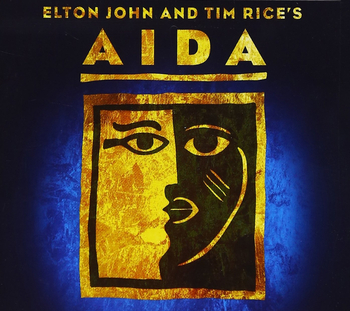 "This is a story of a love that flourished in a time of hate
Of lovers no tyranny could separate"
- Amneris, "Every Story is a Love Story."

Aida is a musical based on Verdi's opera of the same name, with music by Elton John and lyrics by Tim Rice. It premiered on Broadway in 2000, garnering five Tony Award nominations, of which it won all but one, including Best Original Score and Best Actress in a Musical (Heather Headley as Aida).

The title character, Aida, is the Princess of Nubia. Her country has been invaded by the neighboring Egyptians, and their captain, Radames, captures her with a group of women, and not recognizing her, brings them back to Egypt. Aida becomes a slave to Egyptian Princess Amneris, who is betrothed to Radames. Another slave in the palace, Mereb, recognizes Aida and reveals her to the other captives, who beg her to lead them to freedom. As time goes on, Aida finds herself developing feelings for Radames, a development which is further complicated when her father, the king of Nubia, is arrested.

Rumours of it being filmed by Disney circulated in 2007, with Beyonce Knowles as Aida and Christina Aguilera as Amneris, but nothing more has ever been announced. Since the film was supposed to release in 2010 and hasn't started production, it's likely that it got swallowed up in Development Hell.

The musical differs from the opera in a few ways. Most notably, the opera begins with Radames and Aida already in love, while the musical depicts their first meeting and the development of their relationship. The musical also has Radames betrothed to Amneris for nearly a decade; in the opera, he's unaware that she's in love with him and the engagement is sprung on him to his complete surprise. Additionally, the opera has Radames sentenced to die for revealing the plans of the Egyptian army, and Aida, who had gotten away sneaking into his tomb so they can be Together in Death; in the musical, the crime is helping the Nubian king escape, and Aida fails to escape and is captured and sentenced along with him. Finally, there's the closing scene which changes the Downer Ending to a Bittersweet Ending.