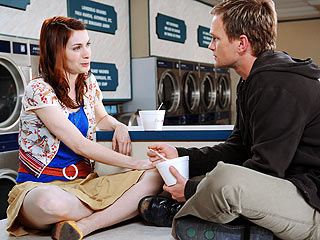 "She met him down at the laundromat
Three a.m., on a washing machine they sat
And talked 'till dawn."
— Collin Raye, "What the Heart Wants"
Advertisement:

Laundromats are a convenient setting when the plot requires characters to meet and strike up a conversation. People don't generally like to leave their laundry unattended, so they have a couple hours of nothing to do but wait for the machines. They might as well pass the time by chatting with the person next to them on the bench. Romantic comedies often use this to set up a Meet Cute. It can also be played for the awkward, like an Uncomfortable Elevator Moment only stretched out to several minutes (on stage). Or it can be creepy: how is Alice to get out of this conversation without abandoning her laundry?

The audience doesn't learn anything about the characters from the fact of their being in a laundromat, but by the same token, characters who meet there could plausibly be anyone, from an Everyman type to a budding supervillain. Sometimes the writers play up characterization quirks in laundromat scenes, to compensate for the blandness. Or the characters might be down to their very last clean outfit, making them look like a Rummage Sale Reject or even someone wearing Improvised Clothes.

It's not uncommon for the characters to get a peek at each others' laundry, invoking tropes such as Black Bra and Panties.

Alternative Title(s): Met At The Laundromat