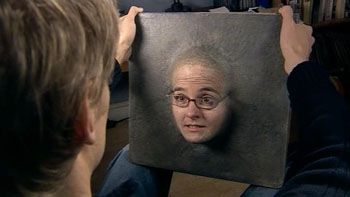 Here's something for you to ponder: they still have a love life.
"That wasn't the first time I met the Doctor, and it certainly wasn't the last. Oh no. I just put that at the beginning because it's a brilliant opening."
— Elton
Advertisement:

The one where a child made the monster, but monkeys made the story.

A silly and (mostly) drama-free episode that focuses on a minor character. "Love & Monsters" was the first example of a "Doctor-lite" episode in the new series: because the lead actors only appear for a few minutes in this episode, they're free to film another one simultaneously.note This became a necessity because of the addition of the Christmas special, effectively meaning that for Series 2 onwards the production team had to make 14 episodes in the same time they made 13 for Series 1.

The story relates what happens when the Doctor isn't around to fend off an alien invasion. For the first time, it focuses on people on the Doctor's periphery: the ordinary people whose lives are upended by the chaos associated with the Doctor, and who usually never even get an explanation.

Advertisement:
Elton Pope, our manic, dorky and Unreliable Narrator, idolizes the Doctor. He's been fascinated by the strange man and the weirdness that follows in his wake ever since the Doctor turned up in his house when he was a child. Like Clive from "Rose", but more successfully, Elton forms a club (LINDA; London Investigation 'n' Detective Agency) with a few other like-minded individuals. They bond over their shared experiences with the supernatural and quickly become fast friends. Over time, their weekly meetings drift away from the topic of the Doctor and towards baking sessions and Electric Light Orchestra cover band practice. Elton even falls in love with fellow member Ursula.

Then Victor Kennedy shows up. The neatly-dressed man (who claims he can't be touched because of his "eczeeeema") takes over the group and begins to act as its boss, assigning members the task of following up on this lead or that lead. Some of the members don't agree, and they suddenly and mysteriously stop coming — or, indeed, responding to any contact from other members — but Elton is still interested in the Doctor, and stays on. Elton is given a snapshot of the Doctor in the company of an unknown blonde woman, and told to find her. He stumbles across her identity — Rose Tyler — fairly quickly, and Victor instructs him to ingratiate himself with Jackie Tyler, Rose's mum. Elton does so, but grows to genuinely like Jackie (who sees him as a very nice piece of ass) and is prepared to tell Victor off... until Jackie finds the photo of the Doctor and Rose, and deduces that he has been using her to get close to the Doctor. Enraged, she orders him out.

If Elton wanted the Doctor's attention, he's got it now: the TARDIS materialises near him so that Rose can chew him out for upsetting her mother. All three are just in time to see Victor Kennedy, who is now in his true form: the "Abzorbaloff" (coined by Elton — and the Doctor — after a few much sillier names), an alien that absorbs its victims but does not consume them. Now he's out to absorb the Doctor and all his knowledge. Elton defeats the creature, but it's too late to save Ursula, or any of the other members who had been disappearing, but the Doctor can grant her a semblance of continued life as an animated lump of concrete. What's left of her is still quite beautiful, and Elton takes her home in her new form as his loving girlfriend.

The Doctor and Rose chase an alien known as a Hoix while a man known as Elton Pope watches.

The Doctor and Rose chase an alien known as a Hoix while a man known as Elton Pope watches.