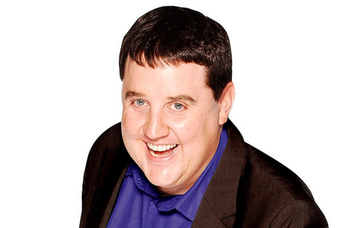 Peter John Kay (born 2 July 1973) is a British stand-up comic from Bolton in Lancashire who rose to prominence at the end of The '90s. As well as performing stand-up, he has written and acted in shows such as That Peter Kay Thing, Phoenix Nights and Britain's Got the Pop Factor (the latter being a parody of the talent shows of the late Noughties). His stand-up is based on observational humour, often centring around his family members and work colleagues. Despite its local focus, it proved to travel surprisingly well and he became popular across the UK.

After one of his earliest stand-up jobs was doing warmup for the audience on Parkinson, when he became a household name he was invited back on as a semi-regular guest, and was present for the show's final programme.

He went into semi-retirement after 2004, but returned in 2010 with a new stand-up tour entitled The Tour That Doesn't Tour Tour, Now On Tour. A brand new sitcom Car Share began on BBC1 in April 2015, about two ill-matched people forced to share a car to work every day.