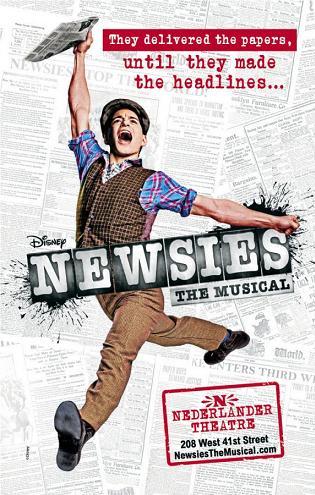 Now is the time to seize the day!
"There's change comin' once and for all, you makes the front page, and man, you is major news. Tomorrow they'll see who we are, and sure as a star, we ain't come this far to lose!"
Advertisement:

Newsies is a 2012 stage musical produced by Disney. It is an adaptation of the critically-panned but beloved 1992 film that follows the story of a group of newsboys in New York City in 1899, who strike against the city's biggest newspapers and their publishers after the price of newspapers goes up. Led by Jack Kelly, a charismatic and brash 17-year-old with a hidden soft side, the boys fight to expand their movement with the help of a Katherine Plumber, a young, ambitious reporter. Even as he leads the striking newsboys alongside new friend Davey Jacobs, Jack longs to escape the weary life of industrial New York and dreams of the broad horizons of Santa Fe...

With an expanded score by original songwriters Alan Menken and Jack Feldman and a book by Harvey Fierstein, the production initially began as a regional production at the Papermill Playhouse, intended solely to polish the material and give it prestige for purposes of licensing for high school and regional productions. Instead, fan and critical response was positive enough to convince Disney to move it to Broadway for a limited run, which, following a wave of enthusiasm and positive press, turned into an open-ended run of over 1,000 performances. It garnered several Tony nominations and won two, for Best Original Score (Menken's first Tony) and Best Choreography.

Unlike most Broadway musicals adapted from Disney movies, Disney actually filmed Newsies for posterity, in 2016. This recording received a limited run in movie theaters, followed by digital distribution and streaming releases.