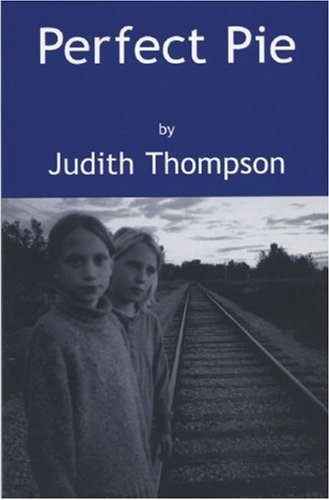 Come with me. We have to get away from here, come with me.
"You might want to see your old friend."
— Patsy
Advertisement:

Perfect Pie is a play written in 2000 by Judith Thompson.

The play is the story of two women (and only two: no one else technically appears other than their past selves) meeting and reconciling after decades of never speaking to each other. Pasty Willet is a middle-aged woman who lives on a family farm in a small town in Ontario. Her life, married with several children, is not perfect but is by no means awful. Eventually, however, she finds herself dictating a message by tape to Francesca, a famous actress, and inviting her over to visit nearly out of the blue.

She explains it's been years, after all, and she misses Marie Begg, the girl who had been her best friend from the day they met. Marie, now called Francesca, who is beautiful, renowned, and never able to shake the sense of being alone in the world, finds herself agreeing despite her trepidation. She returns to visit the small town where everyone had treated her as less than dirt- everyone, that is, but Patsy.

Together, they awkwardly try and piece back the relationship that had broken the night that something terrible had happened to the girl who had been named Marie until then, and which had ended with Patsy in a coma and Marie running away to become Francesca.

In 2002 it was adapted into a film starring Wendy Crewson (Patsy) and Barbara Wilson (Francesca).

Tropes found in this play include: