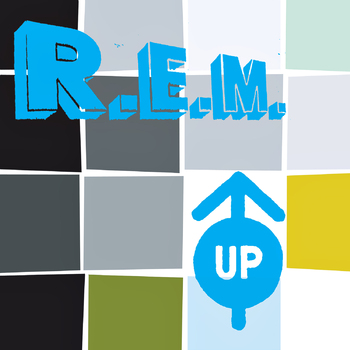 "Save me from myself again."
Advertisement:

Up, released in 1998, is the eleventh studio album by American Alternative Rock band R.E.M.. Shortly after the release of New Adventures in Hi-Fi, the band became interested in shaking up their sound once again; looking towards all the styles of music they had either ignored or refused to explore, they decided on approaching a more experimental sound, grounded in Electronic Music, drum loops, and percussion. Thus, in 1997, they began rehearsals with this radically new sound in mind, planning recording sessions for that October.

However, just before they were to enter the studio, Bill Berry suddenly announced that he was retiring from the music industry, influenced by a mix of burnout, health concerns (after a near-fatal brain aneurysm on the Monster tour), and a desire to start a new chapter in life. Aware of the band's democratic manner of operating, Berry knew that his loss could potentially threaten the future of the band; not wanting to take his bandmates down with him, he encouraged them to continue as a trio, using their planned change in sound as a stepping stone for redefining themselves without him.

While Berry's encouragement provided some form of safety net, the shock of his loss caused the remaining members to cancel the planned recording sessions, unsure of how to go on without Berry helping with their songwriting. R.E.M. would ultimately return to the studio in February 1998. As prior collaborator Scott Litt had also left to focus on his independent record label, the band brought aboard Monster and New Adventures engineer Pat McCarthy as their new producer. The band would work with McCarthy until 2004, and he would use his work mixing Madonna's similarly electronic Ray of Light to help craft the band's new approach to their music. To further help with the shift in sound, the band enlisted the engineering help of Radiohead collaborator Nigel Godrich, fresh off of producing the smash success OK Computer.

Despite having veteran electronic-oriented staff on their side, however, R.E.M. still found Berry's absence hanging over them like a Sword of Damocles, with their uncertainty and anxiety reflected in the more downbeat tone of the music, itself more of a lengthy, mostly uniform soundscape of plodding synths and hushed vocals compared to their usual energetic and varied style. In fact, the band nearly broke up as a result of the stress they faced during recording, only soldiering on due to Berry's requests for their continuation.

Up was supported by four singles: "Daysleeper", "Lotus", "At My Most Beautiful", and "Suspicion".

You wanted a challenge that's troping you higher: