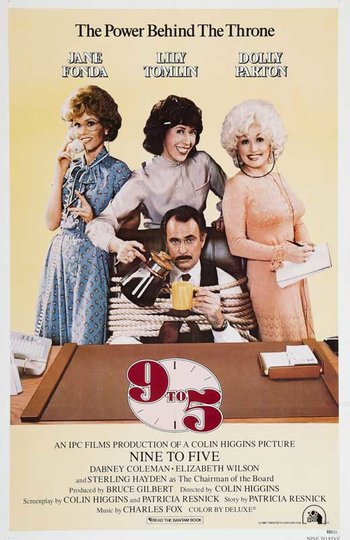 What a way to make a living!
Hart: I'm not such a bad guy!
Judy: You're a sexist, egotistical, lying, hypocritical bigot!
Hart: So I have a few faults; who doesn't?
Advertisement:

When her husband leaves her for his secretary, Judy Bernly (Fonda) starts a new job at Consolidated Companies. She is befriended by Violet Newstead (Tomlin), an office manager who advises her on the best way to navigate through daily office life. The office is run by Frank Hart (Coleman), their vulgar, sexist, and somewhat incompetent boss who spends a good chunk of his time hitting on his unreceptive secretary Doralee Rhodes (Parton) and spreading rumors that they're sleeping together, which leads to her being ostracized by her co-workers.

After Violet is denied a deserved promotion (since Hart doesn't promote women), she, Judy, and Doralee begin bonding over their hatred of their boss, sharing with one another their personal fantasies of bringing him down. Hilarity Ensues when Violet accidentally puts rat poison into Hart's coffee; he finds out about it and tries to use the knowledge to blackmail Doralee, prompting the three women to kidnap him and hold him prisoner in his own house until they can figure out a way to fix the situation. In the meantime, they have to conceal Hart's absence and keep the office running as though he were still present...

Upon release, the film was incredibly successful and was the highest-grossing comedy of that year. It was subsequently adapted into a TV sitcom that aired sporadically between 1982 and 1988. In 2008, it was also turned into a stage musical.

The Broadway Musical has examples of: