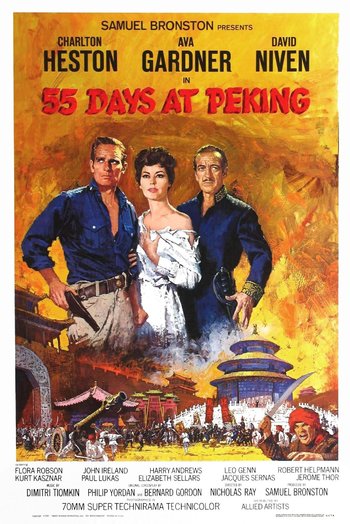 A 1963 Epic Movie about the Siege of the International Legations during the Boxer Rebellion in the waning days of Imperial China. The movie primarily focuses on three fictional characters — U.S. major Matt Lewis (Charlton Heston), British minister Sir Arthur Robertson (David Niven), and Russian baroness Natalie Ivanoff (Ava Gardner) — as they struggle to hold out against the Boxers and have various personal issues.

The movie was a Troubled Production and an almost literal Creator Killer. Director Nicholas Ray (he who gave us Rebel Without a Cause) collapsed on the set and had to be replaced, first by Andrew Marton (co-director of The Longest Day) and later Guy Green. Ray's career never recovered. Charlton Heston hated Ava Gardner, later describing her as The Prima Donna who showed up on-set drunk, constantly demanded rewrites and argued with Ray and the other directors. Heston worked with her again in Earthquake anyway. The script was constantly being rewritten during filming, with some of the stars bringing in their own screenwriters to rework their scenes.

To top it all off, the film was a Box Office Bomb, which was very bad because, as you'll know if you've seen the totally epic action sequences, this movie was freakin' expensive. Besides ruining Ray's career, it also sunk Samuel Bronston's production company, which had previously made the successful El Cid and King of Kings. Perhaps this was karma for the film's deplorable use of Yellowface for nearly every Chinese character with lines. Nevertheless, the film has found a life on cable.

And yes, Peking is Beijing. See Why Mao Changed His Name to find out why this movie wasn't called "55 Days at Beijing".

In 1900, the nationalist Chinese Boxer rebellion laid siege to the embassies of the European colonial nations in Peking.

This resulted in soldiers and diplomats from Britain, the US, Germany, France, Italy, Japan and other nations to struggle together against a common foe.

In 1900, the nationalist Chinese Boxer rebellion laid siege to the embassies of the European colonial nations in Peking.

This resulted in soldiers and diplomats from Britain, the US, Germany, France, Italy, Japan and other nations to struggle together against a common foe.