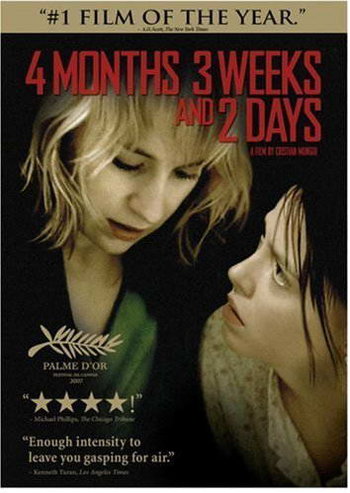 4 Months, 3 Weeks and 2 Days is a 2007 film from Romania directed by Christian Mungiu.

It is set in 1987, shortly before the fall of Communism (which was nastiest in Romania, as dictator Nicolae Ceaucescu and his wife Elena were stood up against a wall and shot). Otilia and Gabita are two young college students who live in a dormitory. As the film opens, Otilia and Gabita are getting ready to take a trip, hurriedly and with some urgency, as Otilia scrambles around to gather items and borrow money from her boyfriend Adi.

Eventually it's revealed that they are not really taking a trip. Gabita is pregnant, and Otilia is arranging for her to get a back-alley abortion, abortion being illegal in Romania. After some struggle Otilia finally manages to secure a hotel room, and she meets the abortionist, a brusque, intimidating fellow named Mr. Bebe. Things do not go well.

Winner of the Palme d'Or at the Cannes Film Festival in 2007, and is seen as a pivotal work in the "Romanian New Wave" of austere, minimalist dramas.