Film / Juliet of the Spirits 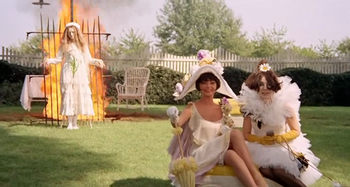 Juliet of the Spirits is a 1965 Italian film directed by Federico Fellini and starring his wife and frequent leading lady, Giulietta Masina.

Meanwhile, a psychic who is one of the hangers-on at Juliet and Giorgio's lavish mansion hosts a seance. This seance seems to open a sort of psychic door in Juliet's consciousness, as she spends the rest of the movie having visions of people and things from her past.

Commonly regarded as a Real Life Writes the Plot work which reflects the marital tensions between Fellini and Masina, as well as Fellini's struggles with his own latent homosexuality.