Film / Kitten with a Whip 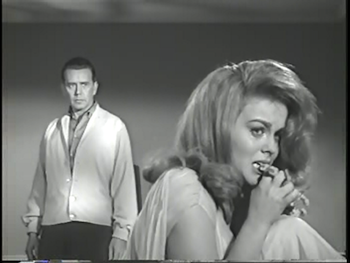 Kitten with a Whip is a 1964 exploitation crime drama film directed by Douglas Heyes, starring Ann-Margret and John Forsythe.

David Stratton (Forsythe), a candidate running for the U.S. Senate whose wife is out of town, comes home one night to find that Jody (Ann-Margret), an escaped juvenile delinquent, has broken into his house. A combination of crocodile tears followed by extortion ends up with him trying to keep Jody both in his house and away from the press, the police and his family. Things get worse when Jody's gang of friends shows up, and before he knows it he's held hostage taking a wounded man to Tijuana for off-the-record medical treatment. Where do Jody's sympathies really lie? And how is David going to keep all of this from ruining his campaign?

Kitten with a Whip contains the following tropes: