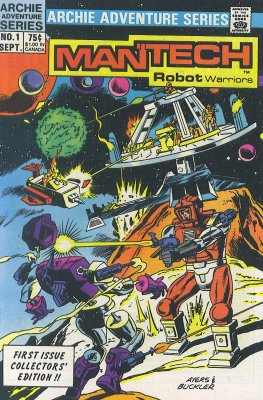 ManTech is a short-lived Science Fiction Comic Book based on a line of action figures, published by Archie Comics in The '80s.

The technologically advanced alien planet Mekka is finally pulling itself together from a dark age following a Robot War, long ago. Two scientists, Jaxon Goode and Tyranik, discover a hidden cache of advanced equipment dating from before the war. They are promptly both struck by a "knowledge ray" which floods their minds with lost technological knowledge. This has the psychological effect of turning Jaxon into a transhumanist who believes "machines are the next step in human evolution,'' and Tyranik into a pro-robot fanatic who believes humans should be surpassed entirely and robots should rule the world. The two argue, and Tyranik leaves, intent on building an army of Mecha-Mooks, while Jaxon ponders how he can stop him.

Continuing to explore the chamber, Jaxon discovers three cryogenically preserved men—alien astronauts from a planet called "Earth." Apparently the ancients had found their Sleeper Starship adrift in space, but hadn't seen fit to wake them. Realizing that they've been injured in the years since discovery, he can only revive them by turning them into cyborgs. So he does, and the men awaken to find that they now look like boxy, semihumanoid robots from the neck down.

The ship's laser expert, dubbed LaserTech, loves the idea of being a super-powered cyborg. The oceanographer, christened AquaTech, sees it as pure Body Horror and wants his humanity restored. The Captain, a solar engineer dubbed SolarTech, isn't thrilled, but accepts that it was the only way to save their lives. Jaxon then proceeds to tell them about Tyranik and his plans to restart the Robot War which almost destroyed Mekka generations ago. The three ManTechs agree to help Jaxon stop him.