Literature / Journey to the End of the Night 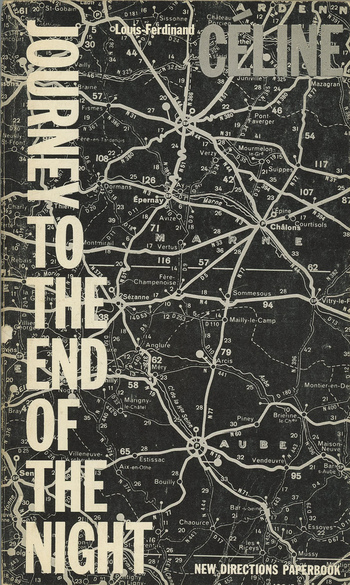 Journey to the End of the Night (in French: Voyage au bout de la nuit) is the most famous novel by French writer Louis-Ferdinand Céline. Semi-autobiographical, it follows a man named Ferdinand Bardamu, who in his experiences in Paris, World War I, colonial Africa and the United States faces the horrors and absurdities of human existence. It deals with themes such as war, trauma and insanity, hatred, patriotism, and hypocrisy, always with an extremely bitter and cynical sense of humor.

Decidedly misanthropic in nature, the book is a tad controversial; in fact, Céline blamed its content for the flack he received later in life (which was in fact owed to his vocal antisemitic beliefs).