Film / He Who Gets Slapped 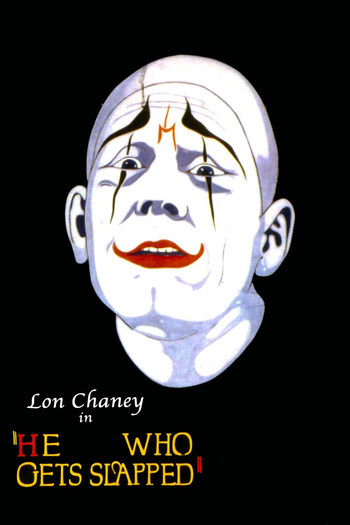 He Who Gets Slapped is a 1924 silent drama film directed by Victor Sjöström, starring Lon Chaney, John Gilbert, and Norma Shearer.

Chaney is Paul Beaumont, a scientist with "radical theories on the origin of mankind". His patron is Baron Regnaud (Marc McDermott), who has sponsored Beaumont up until his breakthrough — but Regnaud has designs both on Beaumont's research and Beaumont's pretty wife Maria (Ruth King). At the Academy of the Sciences, Regnaud presents Beaumont's research as his own. When Beaumont protests, Regnaud slaps him in the face, and the assembled scientists laugh. A crushed Beaumont goes home, only to discover that his wife has left him for Regnaud. She laughs at him, calling him a clown and a fool.

He Who Gets Slapped was the first film ever made by the new MGM studios, created by the merger of Metro Pictures, Goldwyn Pictures, and Louis B. Mayer's production company. It was also the first MGM film to feature the Leo the Lion logo, which had originated with Goldwyn.