Film / The Day the Clown Cried 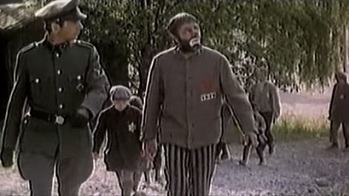 One of the few stills that have been released.
"With most of these kinds of things, you find that the anticipation, or the concept, is better than the thing itself. But seeing this film was really awe-inspiring, in that you are rarely in the presence of a perfect object. This was a perfect object. This movie is so drastically wrong, its pathos and its comedy are so wildly misplaced, that you could not, in your fantasy of what it might be like, improve on what it really is. 'Oh My God!'—that's all you can say."
— Harry Shearer, one of the few people allowed to see a rough cut
Advertisement:

In 1972, Jerry Lewis directed a film about a Holocaust-era German clown entertaining Jewish children in Auschwitz.

It Seemed Like a Good Idea at the Time.

The script was co-written by Joan O'Brien and Charles Denton with Lewis overseeing the final treatment. It was to star Lewis himself, although he was very reluctant to take the project initially. He ended up heading the project in order to pave the way for a career as a serious actor and director. While the subject matter obviously raised more than a few eyebrows, the production was marred by other factors contributing to its Troubled Production: Equipment was lost, the production ran out of money, and the option to make the film had since expired (the script had been floating around Hollywood for ten years). Lewis opted to pay for the film himself but the producer and script writers could not come to an agreement, so he attempted to leave the production entirely. He ended up staying on after the producer, Nat Waschberger, threatened to sue Lewis for breach of contract. By that point, enough of the film had been completed that it was edited together despite the legal issues. However, Lewis took the only tape and locked it away, never to be seen outside of a few private screenings.

The story involves Helmut Dorque (Lewis), a circus clown in Nazi Germany who once had a stunning career throughout Europe. Now down on his luck, he finds himself on the verge of a forced retirement. One night, in a drunken stupor, he rants against Germany and even mocks Adolf Hitler in a bar where some Gestapo and SS troopers are drinking. This lands him in prison, where his troubles get worse. After suffering abuse from the prison guards, he wanders to the Jewish section of the camp. Through the chainlink fence, he notices a group of Jewish children. He performs for them and finds that they appreciate his act, filling him with a sense of hope. The head of the camp does not approve at first but soon gives him the job of loading the children into trains for "deportment". Dorque agrees on the condition that he is able to make an appeal. One night, due to a mishap, he is loaded onto a train along with the children. He soon realizes that the children are to be executed. He puts on a brave face and entertains them all the way to the gas chamber. Filled with remorse, he agrees to enter the gas chamber with them, where he dies.

The script is available online

. Some of the cast members and some of the very few people who have seen the rough cut of the film were interviewed for a Spy magazine article which is available here

from a Flemish film review show from the 1970s has also found its way online. There was also a BBC documentary about this film, which can be viewed here.

In 2015 (two years before his death), Lewis donated copies of all his movies to the Library of Congress, with a stipulation that this film could not be screened for ten years, meaning that The Day the Clown Cried will have sat on The Shelf of Movie Languishment for 53 years.

Janeane Garofalo and Ben Stiller once tried to have a public reading but they were quickly shut down by an Army of Lawyers.

The rough cut of the movie has been screened privately for select Hollywood insiders and has gotten mixed reactions. A French film critic loved it

. Fellow comedian Harry Shearer once saw the film and in a subsequent interview with Spy magazine compared the viewing experience to "if you flew down to Tijuana and suddenly saw a black velvet painting of Auschwitz."

Compare the movie's concept to the premise of Life Is Beautiful, which is a comedy about the Holocaust that similarly takes the actual massacre seriously, as well as Jakob the Liar. Compare and contrast the movie's history to that of The Star Wars Holiday Special (the big difference being that The Star Wars Holiday Special actually aired on TV once and can easily be found online in bootleg form).