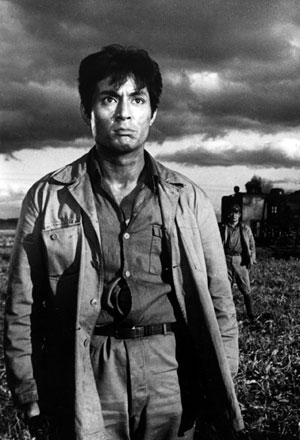 Kaji, the "hero."
"Life and death...
Hope and despair...
Love and truth...
All torn to shreds by war."
- Trailer
Advertisement:

Released in 6 acts over 3 entries, The Human Condition is considered Masaki Kobayashi's greatest work: an epic humanist tragedy, nearly 10 hours in length, set against World War II Japan. The production was directly adapted from a six-volume novel by Junpei Gomikawa, and also drew from Kobayashi's own experience as a pacifist attempting to survive in WWII Japan.

The setting is Japanese-occupied Manchuria in the last two years of the war, 1943-45. The film centers on Kaji (played by Tatsuya Nakadai), a smitten scholar with strong convictions in pacifism and socialism. The film presents Kaji attempting to retain his life and soul through various moral and ethical trials - all the while trying to get back to the woman he loves.

This film is notoriously painful to watch, due to its crushing theme and atmosphere. However, it's often considered to be the greatest singular piece of Japanese cinema ever created for its all-encompassing scope, its incredible ability to utterly dehumanize humanity and its incredible character development.note  or rather, character DE-velopment.

The Human Condition has 3 entries: