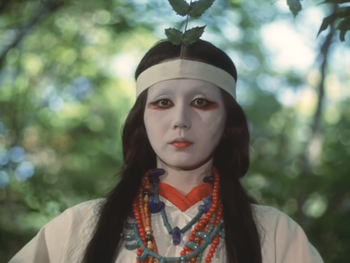 Himiko is a 1974 Japanese film directed by Masahiro Shinoda (Silence, Ballad of Orin) telling the story of the legendary 3rd century queen Himiko, who it is said was a powerful and influential shaman during the Japanese Yayoi period. The eponymous shaman queen is portrayed by actress Shima Iwashita, making this the 12th collaboration between the husband-and-wife team. The film is largely an art-house historical drama produced by the Japanese New Wave indie production company Art Theatre Guild that recontextualizes the legendary Himiko amidst court intrigue, warring tribes and an ill-fated love triangle using psychedelic visual effects to present a highly stylized representation of a shamanistic worldview.

The plot follows Himiko, the shaman of the Sun People in the Kingdom of Wa, who through a sacred mirror receives from and communicate with the Sun God whom her tribe worships. When her half-brother Takehiko returns from China and having spent time with the Land People Tribe tensions spark within the king’s court. Himiko is herself overjoyed by her Takehiko’s return and the two embark upon a relationship. But her handmaiden Adahime is also smitten with the dashing traveller and seduces him. When Himiko begins to receive messages from the Sun God that the people are to acknowledge the gods of the Earth and Land People Tribes tensions come to boiling point and no one is safe.