Film / Here's to the Young Lady 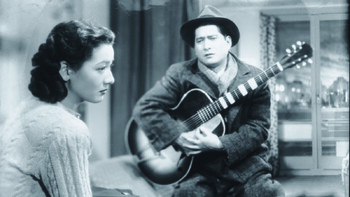 Here's to the Young Lady is a 1949 film from Japan directed by Keisuke Kinoshita.

Keizo Ishizu, a man in his mid-thirties, is the owner of a garage that specializes in fixing up and repairing American cars. He's working-class enough to don a mechanic's overalls, but his business is doing well and he has dreams of building his own factory and making cards.

His good friend Sato surprises him by approaching him with a marriage proposal. The Ikedas, the family of Sato's former employer is looking to marry off their elders daughter Yasuko (Setsuko Hara) and Sato has identified Keizo as a likely match. Keizo is highly reluctant as the Ikedas are highborn aristocrats while he is a common mechanic, if an ambitious one.

Keizo goes unwillingly to meet Yazuko, and his reluctance evaporates when he sees how good-looking she is. He speaks of love at first sight and is very enthusiastic about the marriage. However, there is a complication. While the Ikedas used to be wealthy aristocrats, they are now dead broke, so broke that they are selling off possessions. Even worse, their patriarch is in prison after getting mixed up in financial fraud, and even worse than that, they have a million-yen note on their house due soon that they can't pay. In fact, they need Keizo's money, which is why Sato proposed the match in the first place. Can Keizo and Yasuko bridge the differences between them and find true love?