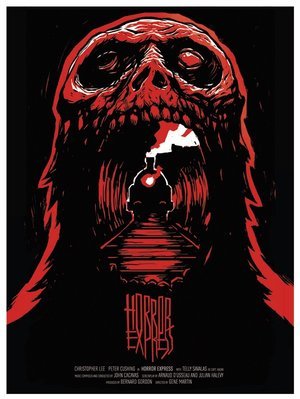 Horror Express is a British-Spanish Sci-Fi Horror film from 1972, directed by Eugenio Martin and starring Peter Cushing, Christopher Lee and Telly Savalas. It is loosely based on the novella Who Goes There? by John W. Campbell. It's also one of the very rare films where both Lee and Cushing play characters on the same side who become friends, which they reportedly enjoyed.

The plot kicks off when a group of explorers lead by Alexander Saxton (Lee) discover the mummified body of an ancient hominid in an icy cave in Manchuria. Excited about the find and its implications for modern science, Saxton arranges for it to be shipped back to England on the Trans-Siberian Express. The specimen soon becomes the center of controversy when it goes missing from its shipping crate, with only a trail of bodies to give any clues as to who (or what) is responsible for its disappearance.