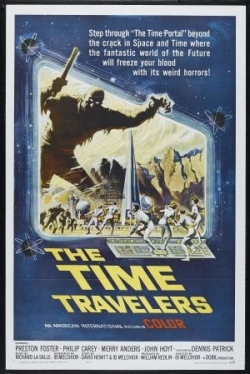 The Time Travelers is a 1964 B-Movie written and directed by Ib Melchior (Reptilicus) and released by American International Pictures. The plot involves a group of scientists who are attempting to open a "window" through time but, due to a series of misfires, actually create a portal into the future and get themselves trapped in an After the End world. Now they have to help the last vestiges of humanity flee a dead Earth for a new home (dodging radioactive mutants all the while) whilst trying to find a way back to their own time.

There was a TV Movie of the same title in The '70s, produced by Irwin Allen and with a story by Rod Serling; but, other than the underlying premise of Time Travel, the two films are entirely unrelated.

For the Mystery Science Theater 3000 (The Return) episode featuring this film, link on over to the episode recap page.