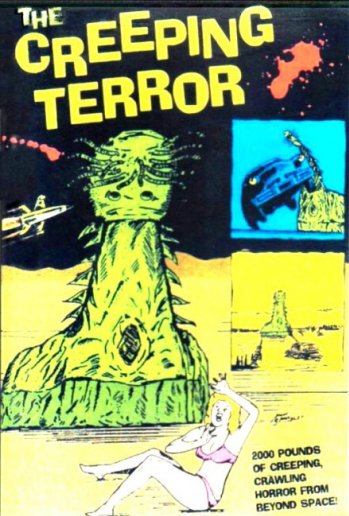 There once was a man named Vic Savage. You're probably thinking "So?" Well, he knew an Exploitation Filmmaker named Allan Silliphant (who would later direct The Stewardesses, the most profitable 3D movie with respect to budget of all time) who was related to Stirling Silliphant (writer of In the Heat of the Night). Vic bought a story from Allan, pretended he bought a story from Stirling, and pulled together some investors - supposedly by promising cameo roles. He took the money, made... a "movie," and disappeared with most of the investors' money.

The story is about a UFO that releases a giant caterpillar-like monster who begins eating random people. It turns out that the monsters (there's a second one inside the ship) are actually robots sent to analyze human beings for aliens. Although the monsters are destroyed by the end, the spaceship still beams its collected data into space...

This "movie" would later be remembered as being particularly bad even for Mystery Science Theater 3000. For tropes and specifics relating to the MST3K version, please check the episode recap page.

A documentary-turned-drama, The Creep Behind the Camera

, was released in 2014 about Vic Savage and his scamming

of the town investors.