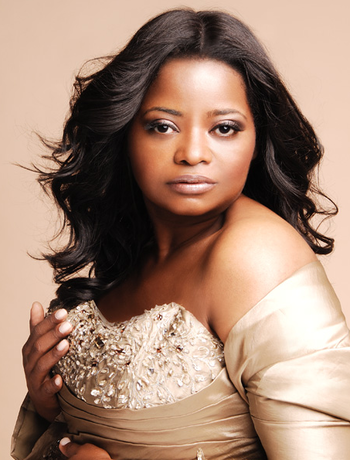 Octavia Lenora Spencer (born May 25, 1970 in Montgomery, Alabama) is an American actress.

Spencer is perhaps best known for her Oscar-winning role as Minny Jackson in The Help, which came after a long string of minor (frequently unnamed) roles in films and television. She's since earned two other Oscar nominations for her performances in Hidden Figures and The Shape of Water.

Because of those roles, she's only the second-ever black actress to earn a minimum of three Oscar nominations, and the first to be nominated over two consecutive years; she's also tied with fellow The Help co-star Viola Davis for being the most-nominated black actress in Oscar history.

She's since appeared in many other films, including The Divergent Series and Snowpiercer. Additionally, some of her more recent television credits include Mom and Red Band Society. She also played Harriet Tubman in an episode of Drunk History.