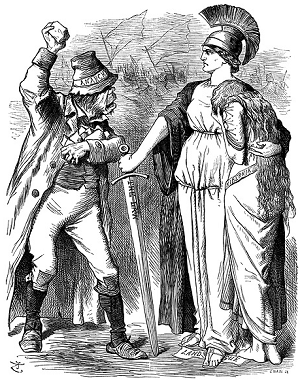 Anti-irish cartoon by John Teniel for Punch! magazine.
One of the easiest ways to look down upon another person is to make fun of their personal hygiene. This extends sometimes to entire nationalities. Thus, the Dirty Foreigner trope was born.
Advertisement:

This trope is strange in that it, in particular, unlike the Funny Foreigner, is a Discredited Trope at best, possibly verging on a Dead Horse Trope, and is most often used today in subversion, as a quick and easy way to tell that a character has a prejudice against another group, and that character is usually painted in a negative light. The French are a particularly common target for this trope, though it is by no means exclusive to them.