Characters / The Legend of Sleepy Hollow

A superstitious schoolteacher who likes food, women, and the Van Tassel fortune. He is generally nice and friendly, but also greedy and rather self-important. He is something of a freeloader, although this is somewhat excused by the fact that he doesn't get paid much for his teaching gig.

The love interest of both Ichabod and Brom Bones. As a beautiful and wealthy heiress, she is the most desirable woman in town, and she definitely knows it. 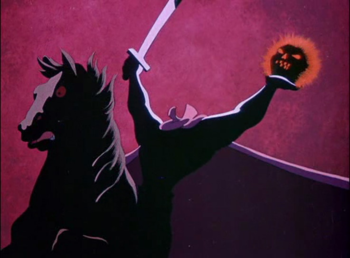 The villain of the story. He is apparently the ghost of a Hessian trooper who lost his head in a battle in the American Revolutionary War, and rises from the grave in search for his head.