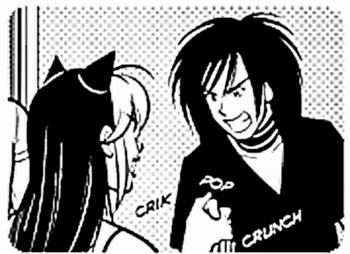 "And then Scritch had me by the hand, crunching all my finger and knuckle bones into little splinters, and I supposed that he would then move on and do the same to all the other parts of my body, one piece at a time. But then I realized he was pumping the remains of my hand up and down."
— Patrick McManus, "Scritch's Creek"
Advertisement:

Two people, often two men, shake hands. One of the men grips harder than the other one, and the other guy might start wincing or showing signs of clear discomfort. The guy delivering the Crushing Handshake might grin about it, having shown off his superior strength or "manliness". This could be done to show off just that, or as a hint that the other guy doesn't like you, or wants to intimidate you—for instance, if he's a rival for a love interest. Or it could be that he Does Not Know His Own Strength. When both parties attempt to do this, the results can be embarrassing for one or both, which can be played for laughs.

In animated works, expect the victim's hand to be red and pulsing afterwards. The squeeze itself would remind one of a tube of toothpaste: the palm area gets basically empty, all the volume migrating to the fingertips.

Can be related to Bear Hug.

Brittas has come back from several months of reconstructive surgery in Switzerland, and with it, comes superhuman strength.

Brittas has come back from several months of reconstructive surgery in Switzerland, and with it, comes superhuman strength.