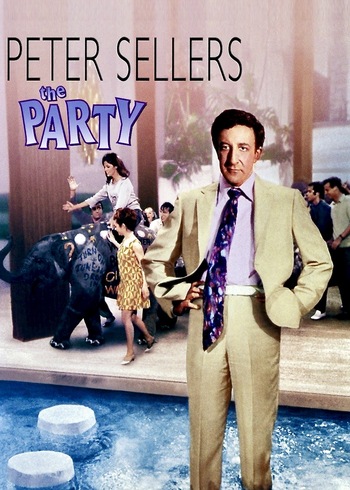 The Party is a keen little comedy from 1968 taking place almost solely at a Hollywood party, and for which most of the script was completely improvised.

While for the majority of film projects this would be a disaster, this film had two things going for it: It was a collaboration between writer-director Blake Edwards and actor Peter Sellers, the duo largely responsible for the hit Pink Panther series. As such, The Party has much the same style of humor and storytelling.

Sellers plays a well-meaning but highly accident-prone Indian actor named Hrundi V. Bakshi. After inadvertantly blowing up a movie set, Bakshi is marked for blacklisting by the head of the studio, but due to a misunderstanding is accidentally placed on the invitation list for an A-list dinner party being held at the studio head's swank Hollywood mansion.

From the moment of Bakshi's arrival at the party, it's one hilarious misstep after another; he confuses the partygoers, befriends his cowboy film star idol, has dinner on a footstool, breaks a toilet, meets a sweet French girl and saves her from a creepy agent’s advances, and finally helps wash an elephant with the help of the host’s hippie daughter, her friends, and a Russian ballet troupe, filling the entire mansion with soap bubbles. It’s less trippy than it sounds.

Said to be Elvis Presley's favorite film. Not to be confused with the 2017 British dramedy film by Sally Potter.