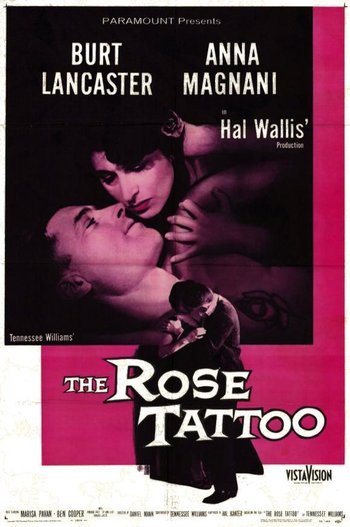 The Rose Tattoo is a play by Tennessee Williams, first produced in 1950.

Serafina was a peasant girl of fourteen when she married a Sicilian baron named Rosario delle Rose. They lived together in a small cottage next to a highway on the Gulf Coast, and its shutters rattled whenever the 10-ton truck that he drove for the Brothers Romano passed by. Their marriage lasted for twelve years, and Serafina counted the 4,380 nights that she spent in bed with her husband until the night when he didn't come home. He was shot at the wheel of his truck, which overturned and caught fire. In violation of Church laws, Serafina has his charred body cremated and the ashes placed in a marble urn.

Three years later, Serafina, still in the business of sewing dresses, has not dressed herself or gone out of her house since her husband died. Her daughter Rosa, now fifteen years old, is introduced to a young sailor named Jack Hunter at a High-School Dance. When Serafina finds out that Jack and Rosa have been dating, she is horrified and locks her daughter's clothes up until her teacher convinces Serafina to let her graduate with her class. She remains proud of the memory of a husband whom she believes to have been hers alone, and is violently perturbed when other women tell her that this was not the case. Suddenly a dark and handsome Sicilian truck driver by the name of Alvaro Mangiacavallo stumbles into her house, shares his miseries with her and finds his way into her heart.

A film version was released by Paramount in 1955, starring Anna Magnani (in her first English-speaking role) as Serafina and Burt Lancaster as Alvaro.