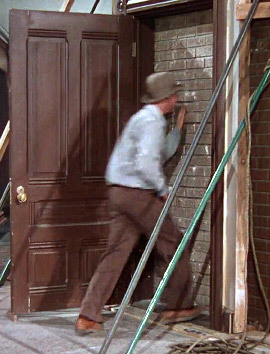 "Hey! Are you tired of real doors clutterin' up your house? Where you open 'em and they actually go somewhere, and you go into another room? Get on down to Real Fake Doors!"
— Rick and Morty
Advertisement:

Simply put, when a door opens to an unexpected impasse, most characteristically a wall. This wall is often made of brick. Most times this occurs, it indicates something has gone deeply wrong.

Although (as stated above) this is most commonly a wall, a variation occurs if the door is supposed to be a portal of some kind, where nothing is behind the door but whatever is physically behind the door. It can also occur with other things as stand-ins for doors, such as curtains.