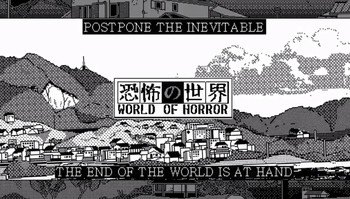 Something terrible has begun to awaken in our town.

World of Horror (Kyoufu no Sekai) is a roguelite horror RPG developed by Polish indie developer Panstasz and published by Ysbryd Games. It's made for the PC, Nintendo Switch, and Playstation 4. A demo is available here

, which was released in the same year, although the pre-2020 demos were initially released from 2018. It was finally released on Steam under Early Access on Wednesday, February 20. Future releases are upcoming for the Switch and the PS4.

The year is 1984, and the world is on the brink of collapse. The Old Gods are beginning to stir from their long slumber, and with their awakening, a small coastal town named Shiokawa in Japan begins to fall into chaos as the sanity of its inhabitants slips and strange monsters emerge. It's The End of the World as We Know It, and there's no way to stop it. However, with some courage, tenacity, cunning, and just a bit of luck, it may be possible to hold off the end times...even if just for a little while.

World of Horror takes inspiration from H. P. Lovecraft and Japanese master of horror Junji Ito with a mix of Japanese urban myths and ghost stories, (mostly) eschewing Jump Scares for atmospheric horror, enhanced by a Retreaux aesthetic reminiscent of 1-bit adventure games, along with the grotesque design of various monsters and creatures. Players follow a branching storyline as one of a handful of characters as they attempt to solve the mysteries haunting their town, collecting items, solving puzzles, and defending themselves from the forces of darkness as they try to stave off the end of the world.

Tropes that can be found in this game include: